"fruits" from the garden

Sadly, not my garden.  I don't even have a garden and the last time I checked, none of my flowers were sprouting fruits or veggies.

This yummy snack was from my friends garden!! She was sweet enough to give me some.

I ♥ cucumbers!
They're so refreshing to eat. 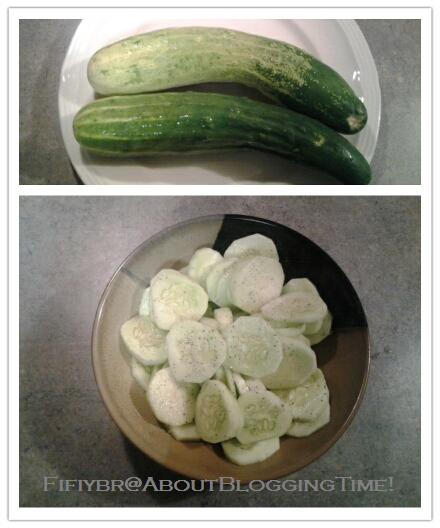 These were washed, peeled, sliced and seasoned with salt, pepper and lemon.......DELISH!!

Much of the nutritional value of the cucumber is found in the skin.
Cucumbers are high in vitamins A and C, calcium, and fiber.
Mostly water and nutritional yumminess, cucumbers are very low in calories.
﻿Enjoy some today!

Wow....who knew that my 200th post would be about cucumbers!!  lol!!  I'm happy to have this blog to share tid-bits from my life, share my crafts/recipes or post sillyness from the day!  Thank you to everyone that has become a new reader of AboutBloggingTime!!  I try my best to respond to each and everyone that comments....even when you have a no reply or no email to reply to, I reply on the post.  So don't think that I don't read them.
It's the middle of the year, I wonder how many posts I'll have by December......hmmm that's sounds like I just challenged myself. (",)

Everyone have a great day!﻿

i ♥ comments! so let me know what you think!
it's easier to reply to comments by email, so if you have no-reply I can't tell you how sweet your comment was.

Fifi
Welcome to About Blogging Time! I'm Fifi. Wife to the most amazing man. Mom to 2 bad furbabies Stella and Ms. Betty. Finally expecting a real human baby....lol! I'm due in January! I'm a Crafter-Sewer-Creator-Baker-Bloggerista. I'm happy you stopped by.

Thank you for stopping by AboutBloggingTime! I'm really happy to have you. I am also Happy to share all of my content with you, but please remember that I do reserve all the rights to the photos, blog posts and all the other content of this website. You can Pin your little heart out or use my ideas, but I ask that you please credit AboutBloggingTime and add a link to my blog if you use one of my ideas.